History on the farm

The Mule Barn was built in 1834 by Salmon Rutherford.  He first built a sawmill along the Aux Sable Creek just west of here to help with building both the Mule Barn and the farmhouse. The barn was built for a granary and as a place for changing the mule teams along the I & M Canal. Mule teams would pull from the chest with a collar like you can see in the machine shed. The two collars would be connected by a whippletree, which you can also find in the Machine Shed. Mules would pull for four to six hours before a fresh team was needed. There were barns located every 10 to 15 miles to allow mules to be rested. A famous mule driver that you may have heard of was James Hickok who was born near Mendota, Il at Troy Grove. At just 17 years of age, he got into a fight with another mule drive, Charles Hudson. To avoid legal action, Bill left for the west where we know of his long career as a lawman and gunslinger. This barn has three floors. It was later modified with a hay trolley and hayfork to store loose hay. Cows were once milked in the bottom of the barn where it remains cool in the summer. 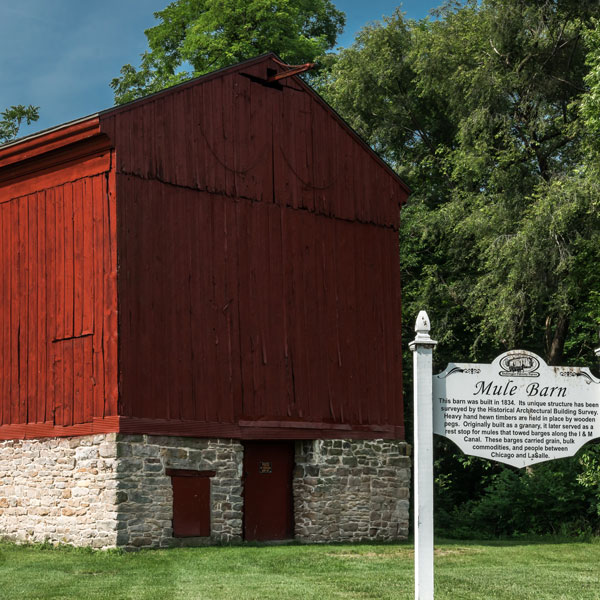 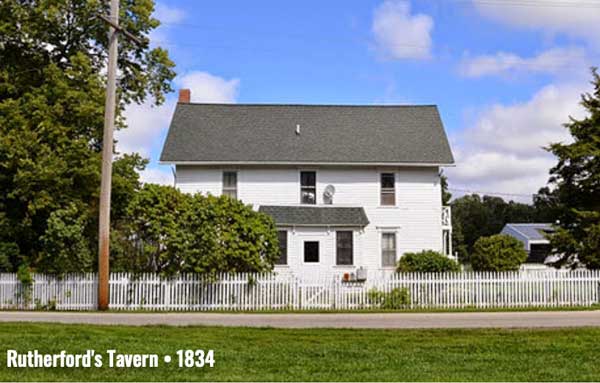 Rutherford's Tavern - Built-in 1834 by Salmon Rutherford, it was the heart of the town. It served as a stagecoach stop on the Frink and Wagner stage line, which ran between Chicago and Peru.  Lodging was 12 cents and a hot meal was 25 cents. (there is more information on the sign)

In the basement, you can still see the bark on the trees that formed the first floor. The house was much larger at one point, with separate staircases for the guests and the innkeepers. A famous visitor that wrote about his experience was the author and poet William Cullen Bryant. His review of his meal was not the most complimentary that could be hoped for. Jacob Hansel moved his family from the Inn next door to the big house. Grandma Dollinger remembers playing here in the yard as a child.

At Rutherford’s Tavern next door, you could get a meal only if you stayed all night. A restaurant was where you could walk in and get a meal without a further commitment.  The Inn was torn down around 1924 and this building was built.  It served mostly as a place to separate the cream from the milk. The milk was fed to the hogs, and the cream was collected in milk cans you might spot around the farm. The milk cans were dropped in the I & M Canal and tied to a tree to keep cool until they could be taken to the Interurban train in Minooka where they would be delivered to Weber Dairy in Joliet.

This building was also where the Hansel Brothers spun their honey. In 1927 they had as many as 63 hives and produced over 1200 pounds of honey in one year. The smaller portion of the Milk House also served as a room for the hired man to sleep.  When the potbelly stove is fired up, it stays pretty warm in that side of the building (the doors have been removed between the small and large parts of the building.) 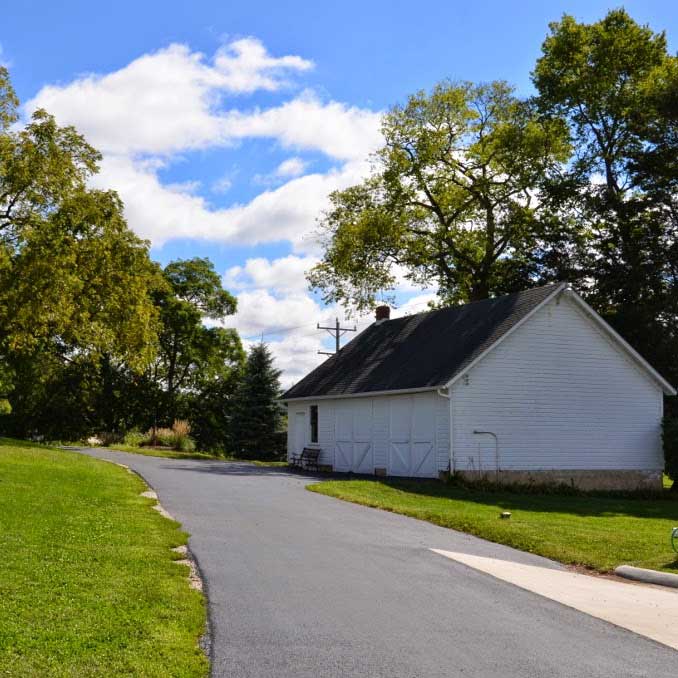 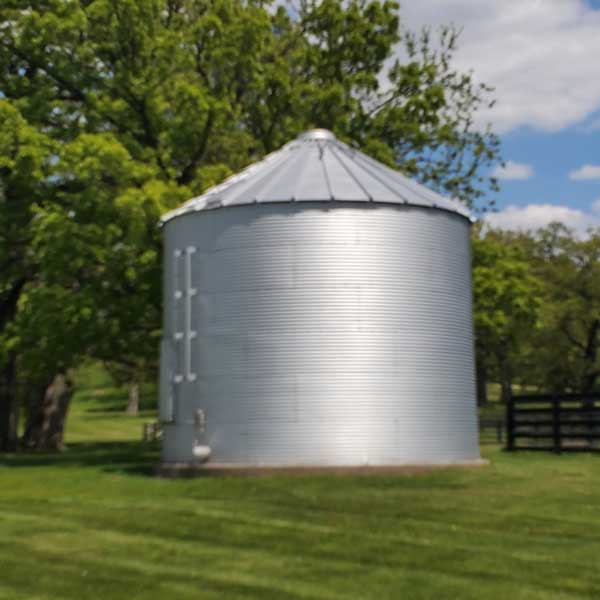 Corn used to be harvested as whole ears of corn. This was done first by hand, then by a corn binder which you can see in the machine shed. The corn picker, a more modern machine, harvested just the ears. To use the corn it needed to be dried down to about 15% moisture. To allow the corn to dry naturally, a Corn Crib was built that had spaces between the boards. These narrow buildings allowed air to flow through and dry the corn out over time. The building across the street is a bigger corn crib with two areas for drying the corn with space in between. When you were ready to sell the corn from the cob, you could use a box-type sheller as you can find in the Engine Shop which would shell one ear at a time. A newer innovation was a large mechanical sheller. You would shovel the ears into a sheller that would remove the kernels and grind the cobs. The cobs could be used for bedding, to mix with feed, or even make corn cob jelly. Shelled corn would be loaded into sacks or shoveled into the bed of a wagon, like the green wagon you see on the farm to be taken to a grain elevator. Corn did move on barges along the Illinois and Michigan Canal. Now we use a combine.  The combine “combined” the process of removing the ear and shelling the kernels from the cob.  We  dry the corn and store it in bins like the Corn Bin on the farm

We have a picture of this building from 1909.  Family legend has it that it was built to house the Model T.  If you look along the edge of the doorway you can see how they recorded oil changes for their many cars and trucks over the years.

Grandma remembers getting to ride in the truck to the top of the hill to collect the mail.   The mailbox for the farm was at the corner of Hansel and Ridge roads.  The road up the hill was a one-lane road.  When you wanted to go up or down, you honked your horn as a warning and hopefully, you did not meet anyone. 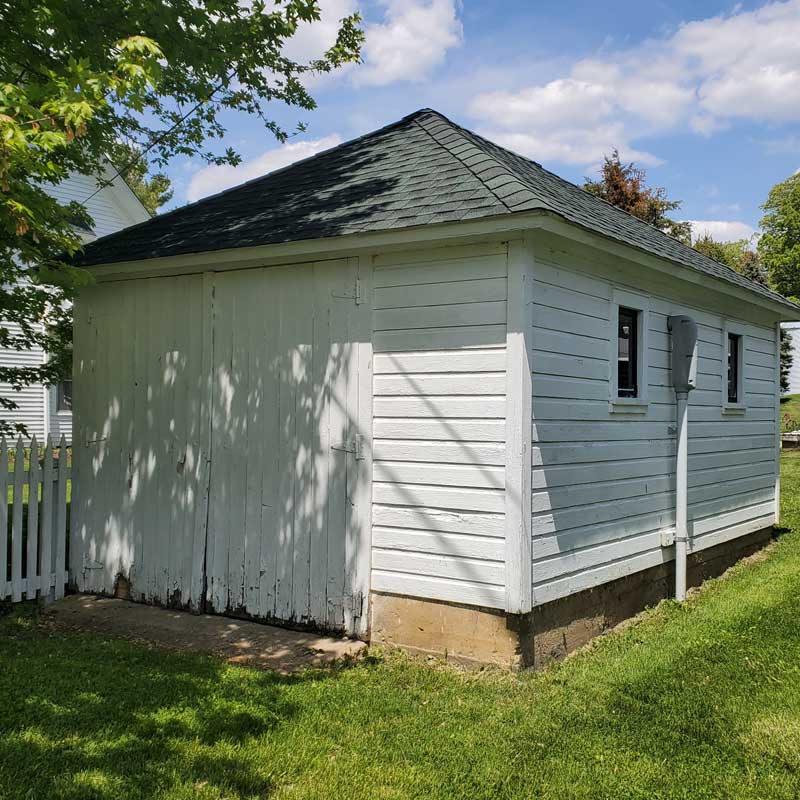 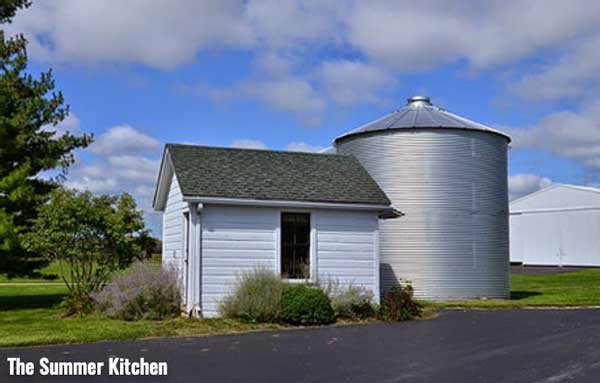 This building was once attached to the porch of the farmhouse before the garage was built.  It was designed as a way to keep the home cooler in the summer by putting a cookstove in this small building instead of heating up the whole house. The two windows across from each other were very important to provide a breeze. You can imagine that a wood-burning oven/stove could create a lot of heat.  There was a reservoir on the stove for water so when you were done with all of your cooking, you had warm water to wash with.

The Summer kitchen was efficient as the men would enter the north door, hang up their dirty things on the hooks on the wall, wash their hands, and face over a bowl.  A pitcher of water would be your source of clean water.  They would then exit the south door and head into the dining room. When neighbors would come to help thresh wheat (using the steam engine you can see on the farm) the ladies would put their best efforts into cooking a sumptuous meal with all of their best recipes and finest china.

The Old Cemetery On the Hill

The first people buried here was a family that was trying to cross the Illinois River around 1825.  A twelve-year-old son survived. A fur trapper came along and helped him bury his family at the top of the area which is now a Catholic cemetery. The land for the cemetery was deeded to the Archdiocese of Chicago for “the goodly sum of one dollar” by Antoine Peltier, owner of the second Inn at Dresden in 1847. It was christened St. Anthony’s Cemetery in honor of this donation.

St. Anthony’s Church remained here for many years. My fourth-grade teacher remembers as a child people walking to church here from a couple of miles away. When the railroad came through in Minooka in 1852, most businesses and activities migrated north. The church also moved to Minooka. There was a change of name at that time to St. Mary even though it was essentially the same congregation. Many of the parishioners were Irish. St. Anthony of course was an Italian. 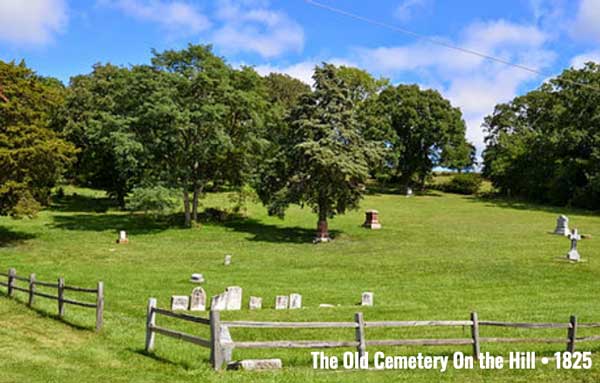 This farm was the town of Dresden, IL platted and recorded in 1836. The farm has been in the Dollinger family since 1852.

In 1989, John & Noreen Dollinger started growing pumpkins. The project has grown with the family. A family business was a great way to teach responsibility, planning, perseverance, and pride in a project done together. 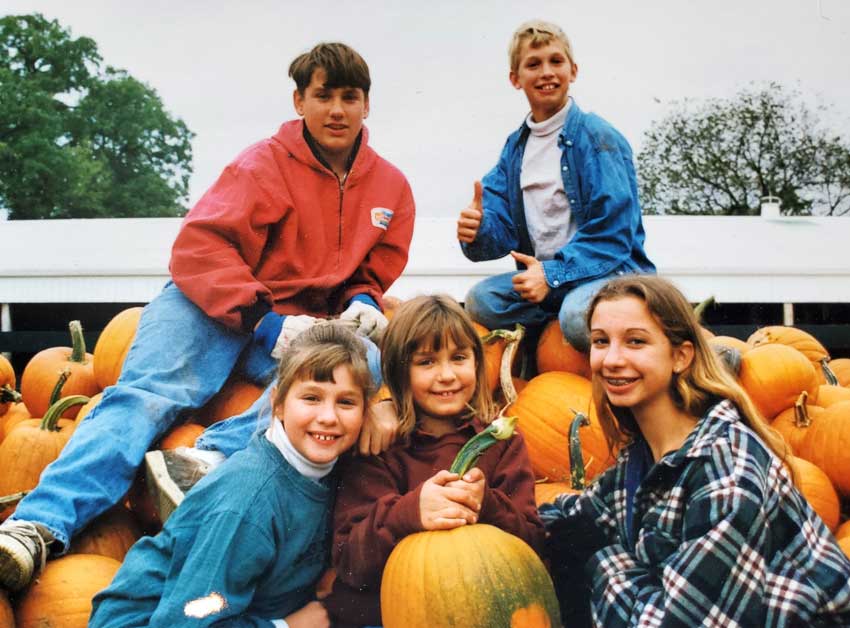